A tribute to all those that have gone before and built my program, my business and my life.

Honey was Cassie's replacement. She is a small, dark, sweet little thing. Always happy, like your typical Golden with just enough sass and intelligence to make her entertaining. 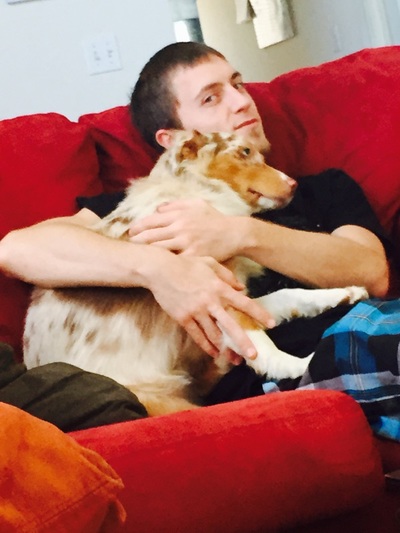 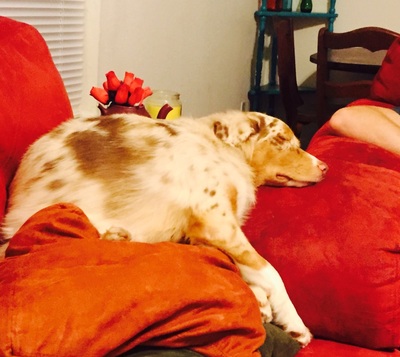 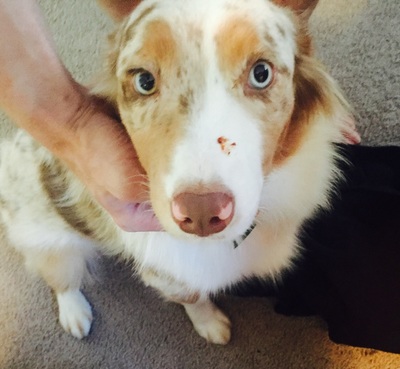 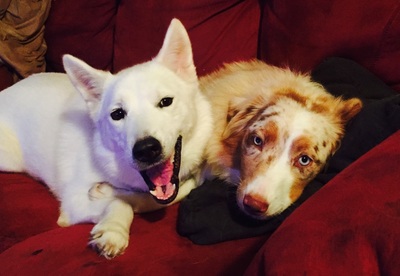 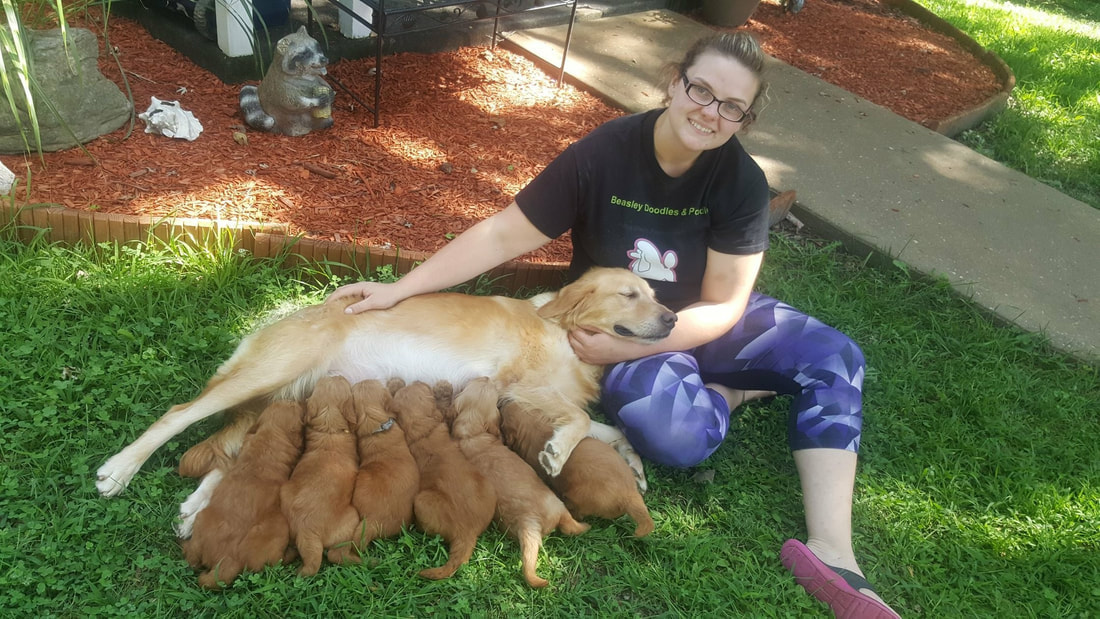 Abby is Lilly's replacement. Abby is an adorable addition to the family. She is cuddly and active and always happy. She loves to play fetch and we are working on shaking and rolling over. She is pretty quick to catch on and it really helped that her breeder was a certified dog trainer and had been working with her already. She is so much fun and her puppies are just as smart and vibrant as she is.

Abby retired in 2018. She is now a nursing student's treasured only dog.
​

Bayl's Nyx of the Night- Retired

Nyx is an F1 black abstract Goldendoodle out of Ophelia and Hooch. Nyx weighs 48 lbs. She acts just like Ophelia. Kinda sassy and definitely in charge, but very snuggly and loves her mommy. (She is in a "guardian" home with my cousin) She also loves to beg for treats from all the clients with her her intense stare when my cousin takes her to work with her; as seen in the picture. (We both work at a vet clinic)

Nyx retired in November 2019. She is staying with her guardian in her normal life.
The ones that didn't get to retire....

Bayl's Ophelia is Here to Parti- RIP 7/11/2015 **In purple is her original profile from the "Our Girls" page modified to past tense, in black is the story of how I lost my baby girl"**
Ophelia was brought into the program as an attempt to replace the unreplaceable dog, Lacy. Ophelia was a black and white parti. Her sire was Exclusively Yours Romeo 4 Rome sired by Classis Koch Chubby Checkers who was the first parti poodle to ever win the UKC National Championship in 2004.
I have never had a dog so smart and I have definately never had a poodle with a nose (It's been bred out of them). This dog could sniff out anything. She was so spoiled and I was awfully proud of her.
AKC and UABR Registered


Ophelia was taken prematurely from our lives. I always keep the dogs on lock down for the fourth of July but I slacked off the following weekend. Ophelia was a very calm, grounded dog. I wasn't even worried about her freaking out over fireworks, it was Apollo I was worried about. I heard them going off and immediately went to the door to call the dogs in. It was too late. Ophelia and Esme had already bolted. Only Apollo came back. I called and called. She always come to me, she was my princess. I knew there was no finding scared dogs in the dark. I figured they ran into the woods and were hiding somewhere in the 100 acres behind the house and they would be back in the morning. They had went the opposite direction, about 3 miles as the crow flies to the four lane highway. She was hit a little after midnight, according to witnesses that stopped and got Esme off the road and out of harms way, the vehicle that hit her didn't even stop. I got a call from Animal Control the next morning, as both dogs had on their rabies tags and were microchipped. So, I did get to pick her up and have a pawprint made and have her cremated. This was the worst emotional disaster I have had since my grandma died... I couldn't even bring myself to change her status on the website for almost two months. Please be courteous with your fireworks, limiting them to the weekend of the 4th and notifying neighbors when it will fall outside of that time frame. It could have been prevented... We had just closed on our house one the 26th of June, so I hadn't gotten to putting the fence in by July 11th, the day she died. I called the fencing company the day after Ophelia died and there is now a 6ft chain-link fence around our yard and plans to fence off the rest of the property soon..

I purchased Vanessa at the same time as Lacy as a birthday present for my mom. Mom takes Vanessa to the Vet clinic with her every day. She loves the attention and are just about prepared for anything by now.
Vanessa is also black and will also throw red puppies when bred to a red.
Vanessa loves to play, fetch, and just run. Now my sister has taught her how to climb up the swingset-fort she has and slide down the slide. "Nessa Up!" and there she goes it's pretty cool.
Vanessa is long-legged and long of body. Very lean and elegant. Her coat is more wiry than Lacy's silky one.
April 13th,2009;New news on Vanessa: She got kicked by a horse and broke her front right leg.
April 6th,2010: Vanessa had her first litter of puppies. They were pure poodle. She had 7. There were 5 reds and 2 blacks.
November 5th, 2010- Vanessa had her second litter. Goldendoodles. 1 red and 5 blacks
November 21st, 2011- Vanessa had her third litter. Goldendoodles. 1 chocolate, 6 reds.
August 28, 2012- Vanessa's fourth litter. 9 Goldendoodles 7 reds, 2 blacks.
(break time after she weans this litter until next winter)


On September 19th, 2013 Vanessa was tragically hit by a car in front of mom's house as she was getting ready to leave for work. Vanessa had puppies that were 8 weeks old and we had one female left that looked just like Vanessa so mom has latched onto her as a replacement for Ms. Nessy.


Suzy--8/7/2005-6/15/2010
​Suzy had a very short retirement before she passed away; probably around 3 or 4 months.  I gave her to my best friend, Chelsie, and she took her everywhere with her they were like two peas in a pod.
We lived way out in the country so it was not unusual for loose yard dogs to run off and not be seen for a few hours or even a day at a time; but Suzy disappeared for four days before we found her up under the house where she had apparently drug herself. She was down in her hips and had nasty sores all over her. We aren't sure what happened to her but we think she got hit by a car or attacked by coyotes or something. We cleaned her up and medicated her but we couldn't figure out what was wrong with her hips.  We couldn't get her to eat and her beautiful frame withered quickly. We ended up putting her to sleep to stop her suffering.
Poor ol’ Suzy... She was my foundation breeding dog for this whole operation. Her and Apollo started it all. She was one of the sweetest and most wonderful dogs I've ever laid eyes on. Chelsie had a tiny little Yorkie that was about 3 months old at the time and Suzy treated that little dog like one of her own puppies. It was the cutest thing. Suzy was the best mother dog of any of them, as a matter of fact she would about kill herself because she wouldn't leave the puppy box to go across the room for a drink.
Suzy was well loved and although we will miss her she left behind a legacy not soon to be forgotten.